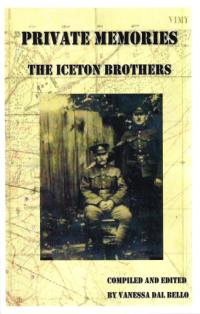 The two Iceton brothers enlisted in the 124th Battalion in Toronto in December 1915, but only one returned home after the war. Family members put together a small collections of letters, photographs, and other keepsakes as a tribute to their service and sacrifice.

Cecil Bruce Ferris, born in Kingston in 1885, enlisted in the 2nd Field Company, Canadian Engineers in September 1914. While serving in France, he sustained a gunshot wound to the chest and spent time in convalescent hospitals in England; during one of his leaves, he married his sweetheart Clara (known as Rosie) in Deal, England. The collection includes their marriage invitation, and dozens of letters between Bruce and Rosie that were sent to his mother Alice, whom Bruce kept well informed on his life, both at the front and in England.