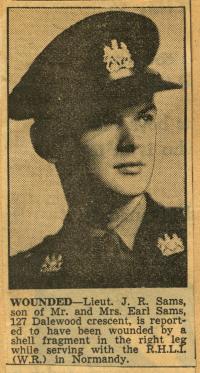 Joseph Reed Sams enlisted in 1943 and fought with the Royal Hamilton Light Infantry. While he was at the front, his family kept a scrapbook of newspaper articles concerning the major battles in which they believed he had fought. Throughout the scrapbook are items that are more personal, such as the telegram informing the family that Sams had been wounded. Other interesting items, added after he had returned home are a Nazi badge, Sams' campaign ribbon, and a fifty-Reichsmark bill. After the war, Sams went on to become an insurance agent, and in 1963 was elected as the Progressive Conservative Member of Parliament for Wentworth, Ontario.